Kamala Harris Is Running for President in 2020. Here’s Where She Stands on 8 Important Issues.

Democratic Senator Kamala Harris is the latest woman to enter the 2020 presidential race, announcing on Martin Luther King Jr. Day that she was joining the already-crowded Democratic primary pool.

Harris, 54, was born in Oakland, to immigrant parents; her mother is originally from India, while her father is from Jamaica. After she graduated law school, Harris was a deputy district attorney before serving as the District Attorney of the City and County of San Francisco.

Below, ELLE.com breaks down where Harris stands on the eight issues voters cared about most going into the midterm elections.

Harris has made healthcare a key part of her platform, recently writing about her mother’s struggle with colon cancer for The New York Times. In the piece, she talks about her support for the Affordable Care Act and shares how she was one of the first senators to sign onto Sen. Bernie Sanders’ Medicare for All bill that was introduced in 2017. Harris wrote, “I believe that health care should be a right, but the reality is that it is still a privilege in this country. We need that to change.”

Harris has been critical of the Trump economy, saying that while unemployment is low, there are still many American families struggling to stay afloat and that the economy “is not working for working people.” She’s also encouraged workforce training in order to prepare people for the future of automation.

The Senator has been vocally against President Trump’s proposed U.S.-Mexico border wall, calling it a “vanity project.” On The View, she said, “By the way, because I was a prosecutor for many years, including the Attorney General of California, I specialize on trans-national criminal organizations. That wall ain’t gonna stop them.”

She’s also supported DREAMers and the Deferred Action for Childhood Arrivals program; in 2017, Harris said she would oppose any end-of-year government spending bills unless Congress acted to protect young people affected by DACA.

Before she ever got to D.C., Harris had a long record of immigration work: While working in San Francisco, she started a job training program for ex-convicts that allowed undocumented immigrants to participate. (She has said before that illegal immigration is “a civil violation, not a crime.”) In California, she also helped create legislation that would protect immigrants who reported or testified about crimes from deportation.

How Women Are Treated in the U.S.

During a speech at the 2017 Women’s March, Harris implored the nation to prioritize women’s issues, which she says include things like the economy, national security, healthcare, education, criminal justice reform, and climate change.

She’s also continuously been pro-choice and has been supported by Planned Parenthood. When she was elected to the U.S. Senate, Cecile Richards, then-President of Planned Parenthood, said, “Congratulations to Kamala Harris on her victory. Kamala Harris is a staunch advocate for women’s health and rights. She ran proudly on an agenda to expand access to reproductive health care, and her victory shows that voters demand their elected officials protect women’s health and rights.” 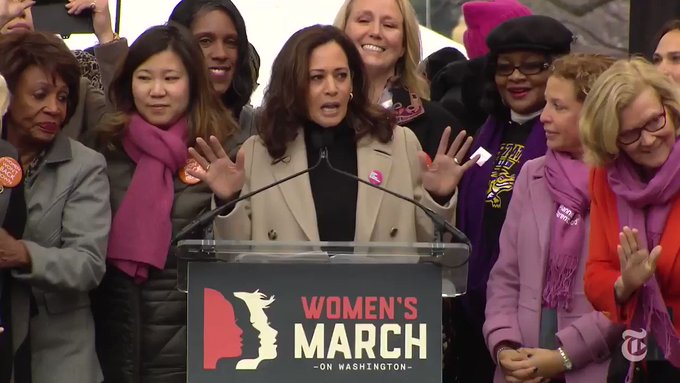 Harris supports a ban on assault weapons and on the sale of high-capacity magazines. While Attorney General, she also introduced a California-wide sweep to seize illegally-owned firearms; more than 1,200 firearms ended up being collected.

A few months before she announced her intentions to run for president, Harris proposed a plan to give a tax credit to the middle-class, called the LIFT the Middle Class Act. The bill would offer up to $3,000 a year (or $250 a month) to single people, while married couples would get up to $6,000 a year (or $500 a month). The credit would be available to couples that earn under $100,000 a year or singles who earn less than $50,000 a year. (Learn more about it, here.)

According to Politico, Harris said about the bill, “We should put money back into the pockets of American families to address rising costs of childcare, housing, tuition and other expenses. Our tax code should reflect our values and instead of more tax breaks for the top 1 percent and corporations, we should be lifting up millions of American families.”

She’s also proposed the Rent Relief Act, which would give a tax credit to certain people who spend more than 30 percent of their income on rent. The bill has been criticized for being favorable to landlords, since people could end up spending even more of their money on rent, and because it doesn’t do anything to address the current supply of housing. (Learn more about the Rent Relief Act, here.)

In 2018, Harris was one of the Democratic Senators who signed a letter to Trump saying he did not have the authority to order a preemptive strike against North Korea without permission from Congress. She has also criticized Trump’s strategy in the past, saying, “My concern is that we cannot conduct our foreign policy through tweets.” Harris has also been vocal about disagreeing with how Trump decided to withdraw troops from Syria, a move that contributed to the resignation of former Secretary of Defense James Mattis.

Last year, Harris also gave an off-the-record speech at the American Israel Public Affairs Committee conference, where she spoke about her support for United States-Israel relations.

Harris is for a $15/hour minimum wage, saying she believes the minimum wage should be a living wage, and she’s advocated for equal pay between men and women, as well as a federally mandated paid family and sick leave.

In an essay for Teen Vogue, she wrote, “Our daughters should not grow up believing that their work is worth less than a man’s. It’s time to end this fundamental unfairness. It’s time to make equal pay a reality for all Americans.”

Harris was one of a number of senators who entered the national conversation during the confirmation hearing for Supreme Court Justice Brett Kavanaugh, who has been accused of sexual assault and sexual harassment.

During the confirmation, Harris aggressively questioned Kavanaugh, specifically asking him about special counsel Robert Mueller’s investigation and a woman’s right to an abortion.

At one point, she asked, “Can you think of any laws that give government the power to make decisions about the male body?” to which Kavanaugh said, “I’m not thinking of any right now, Senator.” She also asked Kavanaugh if he would ask the White House to authorize an FBI investigation into the sexual assault allegations made against him:

She ended up voting “no”on his confirmation.

And one more thing…

Many think Harris will have to reckon with her past record as a prosecutor, district attorney, and attorney general during the 2020 cycle. According to Vox, that very record is mixed: “She pushed for programs that helped people find jobs instead of putting them in prison, but also fought to keep people in prison even after they were proved innocent. She refused to pursue the death penalty against a man who killed a police officer, but also defended California’s death penalty system in court. She implemented training programs to address police officers’ racial biases, but also resisted calls to get her office to investigate certain police shootings.”

She’s already begun to address the record, which will surely come up many times over the coming months, saying, “The bottom line is the buck stops with me and I take full responsibility for what my office did. There are cases … where there were folks that made a decision in my office and they had not consulted me and I wish they had.”

Replacement Theory; The JIG is Up Dude! #americasn

When You Don't Want To Be Here #MYSOULISFREE

When You Don’t Want To Be Here